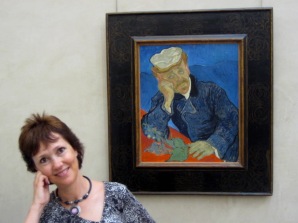 I am a good example.  Of what we should not do.  I have learned recently that the main reason that people procrastinate is due to fear of failure.  I believe this is part of my problem.  For instance, sometimes I plan to go play pickle ball.  And I often chicken out because I know that whomever I get teamed up with is destined to lose the game along with me.

I have done the same thing with art.  I have belonged to the watercolor society since 2003.  I am ashamed to say that I entered an exhibition for the first time 2 years ago. I was motivated only because suddenly I was Vice President/President Elect, and I knew that it would be unprecedented and ridiculous to be in that position without even entering one show.  And why hadn’t I? Because I was afraid of rejection and knew it would be an even bigger stretch to win an award. So I kept waiting to hopefully be a better artist someday.

So guess what?  The first time I entered, my painting, “Summer Flowers” was accepted into the Spring show!  Then I was rejected for fall, then accepted the next spring.  Then failed to make the cut for the fall exhibition again.  But I am a Two Star Member now.  Just think, if I had been entering all along, I could possibly be further along for Signature recognition.

Bottom line of what I have learned is:

On the other hand, in his career of about ten years, Vincent Van Gogh painted thousands of paintings and only sold one.  So his motivation must not have been financial or awards, or critical acclaim.  In fact his work was criticized and ridiculed. Yet his paintings now are sold for millions.  In fact, his painting, L’Allée des Alyscamps sold for 66 Million in 2015.  So bottom line is that no matter what, we should feel personal satisfaction just because we have a passion to express ourselves, not because of what others, including judges, determine about our art.